Just thought I'd include a link to an earlier rant I had on Google Profiles. Having one place to link all my posts together would be a great idea - Anyone know if someone is trying this?

I want to do everything with one login. Google+ means that I need to Yahoo or Hotmail. Is Google really a secret marketing arm for Micro$oft?

Damn I knew Micro$oft's marketing arm was good, but I just didn't realise how much they have infultrated the entire I.T. industry. Will be interesting to see what comes first - +1 for Apps users, or an anouncement that Bill Gates is the new owner of Google.

I just posted this over at http://googleenterprise.blogspot.com/2011/03/coming-soon-to-google-apps-1-button-and.html and got the following : 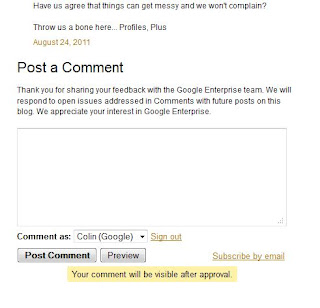 It will be interesting to see if it gets approved.
Posted by Colin at 12:29 No comments:

According to my mobile, the last call from them was Friday 26th August.

They rang to talk about my Telstra account and asked for the person in-charge. I said it was me and they hung up.

Seems like they are data-farming - what will they do with the data? How will it be used to rip someone off?

Somehow Mr K tracked the number down to Simply Tel, who according to their own web site homepage "is a leading telecommunication service provider".


Rang the 1300 number and spoke to someone in sales. They said that the number looks like one of their numbers. They suggested that I go on the DNC register. I don't mind receiving calls, I just want the person at the other end to be a little more forthcomming with information - not hangup after I advise that I am the person they want to talk to.

Found this issue at the site also.

Thanks to the guy's at Experts Exchange I found the idea of uninstalling some of the updates.

Slow printing of some forms from MYOB using TS2008 - Solved.

A client reported that printing a quote from MYOB was taking a long time to print.

I thought that it may be due to images in the form, so I checked - the quote.frm file was 8KB, and the invoice.frm was 23KB - the larger file printing quicker!

MYOB suggested timing one of their plane paper forms, which also took 50 seconds per page.
MYOB then suggested moving were overlapping fields on the quote.frm

At this stage I moved from the clients computer to my computer, and a different printer (an Officejet). The quotes printed in a timely manner on this printer. Tested on a second laser printer - slow. Hmmm... something to do with (at least) Kyocera laser printers....

I then re-created the quote.frm without most of the vertical lines (which the invoice does not have either) and all worked well.

Now, the vertical lines did make the quote look nice and professional, but not worth the sacrifice of the speed.
Posted by Colin at 08:05 1 comment: